We are the oldest camera shop in South Australia and our award winning store is third generation family owned and operated since 1965.

PhotoCo are Pro-Stockist for Leica, Nikon, Canon, Olympus, Panasonic, Sony and Fuji as well as selling a huge range of other brands. We also provide photographic courses, excursions and a range of photographic related supplies.

We strive to employ award winning South Australian and National recognised leading professional photographers as well as facilitating a photo-technician who has proven to be a local and national industry leader within the field of analogue photographic repairs and servicing.

1941 we began our journey with Allan Bulley enlisting at the age of 14 with the British Royal Marines as a musician and voluntary photographer. He went about setting-up and utilising darkrooms onboard several British navy ships.

Allan’s children fondly remember him socially, having swung over his shoulder either one of his Leica’s, a Rolleiflex for weddings or his Linhof for commercial work.

He disembarked with his wife and 3 children at Port Adelaide from the Fairstar cruise ship. Allan spent the next few years as a full-time photographer specialising in family portraits and wedding photography. Allan and Hilda took the opportunity to develop their own photographic retail business. As this was prior to colour photography, a colourist was employed on 2 days a week. She was a talented lady who hand painted wedding and portrait photographs, using a piece of material to match the colour of the clothes. Allan and Hilda’s children Vivien and Peter also worked part-time assisting Hilda and Allan in the studio.

Allan and Hilda engaged their daughter Vivien to manage PhotoCo while having a well-earned break. An invitation from Agfa to attend Photokina and a visit to the Leica factory in Germany were the highlights of their trip. Not to mention the purchase of a many cameras to sell back home, holidays always involved excursions to camera shops.

Allan and Hilda persuaded Peter and Marijan with two-week old son Paul to return to Adelaide and for Peter to work at PhotoCo. Peter Bulley and wife Marijan Bulley purchased the business from Allan and Hilda. As this second generation took over the business, so too did the business reshape itself with a larger range of photographic equipment.

Installation of their first film and colour photo processing machines, Peter and Marijan took out a debt twice the size of their home loan! …but never looked back. At one stage they even launched two more camera/photo processing stores in Adelaide, one on Hindley St. and one at Victoria Square. 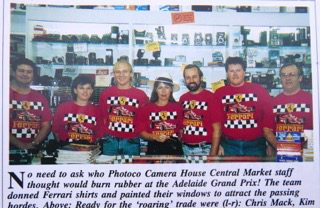 Business diversification – Peter and Marijan worked many extra hours searching for ways to support customers. Some of these involved setting-up Camera stall at the International Grand Prix in Adelaide and late night film processing for event photographers. Officially began another exciting partnership with the third generation Paul and Luke Bulley. The brothers bring their fresh ideas to best assist the business moving forward. Paul is an awarded freelance photographer and education consultant. Luke has a degree in International Business and with his grandfather’s flair, he’s helping customers, diversifying stock and working on marketing the business to best meet the needs of the local, national and global market. Finally we would not be here on this exciting journey without any of our loyal, friendly and supportive staff and customers.

Thank you for the support,

Can’t Find What You’re Looking For? get in touch